How to make dill pickles (in a hurry) 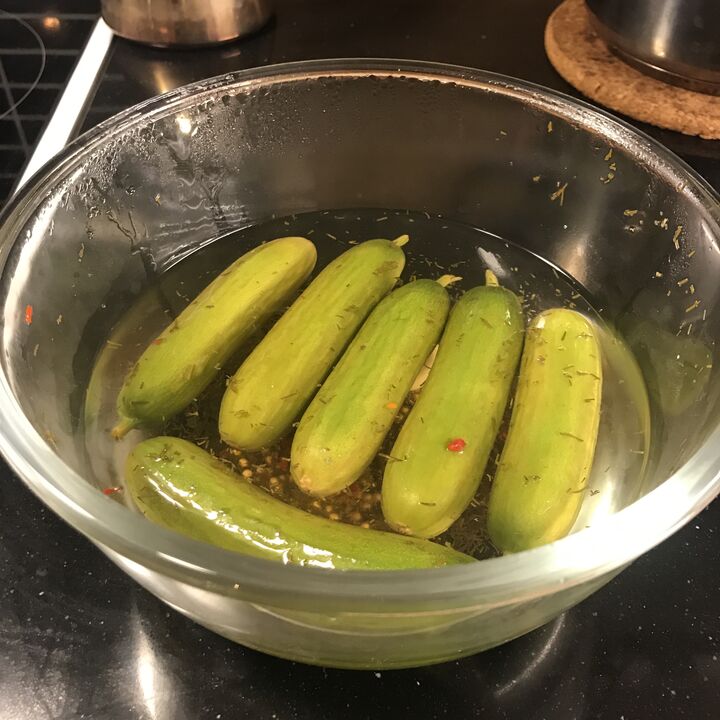 I really wanted some dill pickles, which you cannot find in the normal super market in Sweden. I think the pickles here taste awful!

I had some snack cucumbers, so I thought I would try to make a quick version without letting them sit for several days since I wanted some right away for a sandwich.

I added 1/3 cup water and 1/3 cup vinegar in a pot and let it boil. Meanwhile I added some mustard seeds, frozen dill, a crush cloves of garlic, some red pepper flakes, salt and just a touch of sugar.

Next I put the cucumber in a bowl and the ones I wanted to eat right away, I cut in half. Then I poured the water/vinegar mixture over the cucumber. I let it sit for 10 minutes and then I ate the halves cucumber in my sandwich.

It definitely didn’t taste like a traditional dill pickle yet but I enjoyed the flavor, so I would recommend this. 😋🥒

The rest I’ll leave in the fridge for up to a week.

Have you ever made pickles? What recipe did you use? 🥒🥗

My wife often makes pickled herring, but she makes the recipes up as she goes to vary the taste. It can be red onions, carrots, mustard seeds, black pepper seeds, dill, mustard sauce and lots of other things in them. Not all at the same time though.

But isn’t herring a stinky fish? 😆

I’ll stick to pickling my pickles haha 😊 has she ever pickled anything else, like onions or jalepeno?

No no no! Herring can be stinky if you ferment it to “surströmming.” Otherwise it’s not. It looks like small filets of fish.

Or you can fry it like this. It’s a Swedish classic.

Or you can pickle fried herring. 😀 You will often find this on the Swedish Christmas table.